In 1980, Mr. Mickey Chen established Kingmaker Footwear in Changhua, Taiwan. Over the past almost 40 years, Kingmaker has grown into one of the major footwear manufacturing groups worldwide, and a public company, listed on the Hong Kong Stock Exchange (Stock code:01170) under the name: Kingmaker Footwear Holdings Limited. 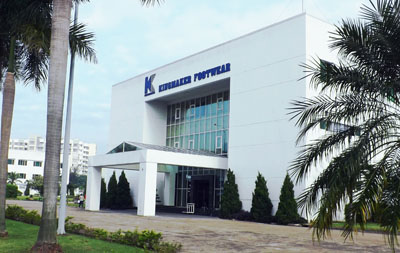 In 1988, Kingmaker opened its first factory in China (Zhuhai, Guangdong) and also an office in Hong Kong.

In 1994, Kingmaker went public on the HKSE (Stock code:01170) under the name: Kingmaker Footwear Holdings Limited. Founder of Kingmaker, Mr. Mickey Chen, was one of the youngest chairmen of listed companies in Hong Kong.

From 2014, the production lines in South East Asia factories under Kingmaker Group steadily grew mature and continued to expand. Today, Kingmaker Group has approximately 9,000 workers with over 200 people in management team from different countries. The annual capacity of Kingmaker is over 10 million pairs of footwear per year.